UPDATE APR 2022:
Game is now playable under Linux, and any further issues or fixes needed should not be EAC related. Please see https://www.protondb.com/app/1063730 for more info and possible fixes for your specific issues.

THE FOLLOWING INSTRUCTIONS ARE AT YOUR OWN RISK

There has been no OFFICIAL announcement for Linux EAC support. It is possible that you may be banned from the game even though this doesnt break any rules or modify any game files.

NOTE: This launch option opens the New World Launcher directly and the game then loads the Proton EasyAntiCheat runtime. THIS DOES NOT DISABLE EAC OR BYPASS THE NORMAL LOADING OF EAC BY THE GAME, IT JUST STARTS THE GAME LAUNCHER DIRECTLY

Note for players running on gaming laptops: if you experience poor performance your game might be using your CPU graphics instead of your dedicated GPU. You will need to add the following launch option BEFORE the one above:
DRI_PRIME=1

UPDATE 25 MAR 2022: Some people have gotten the Public Test Realm working on Linux with Proton. The fact that AGS has finally included the required easyanticheat_x64.so file with the PTR so this can be made to work is a great sign that they have finally taken our requests for Linux compatibility seriously. Hopefully we will be seeing official support soon!

With the launch of SteamDeck looming ever closer the interest in Linux and specifically gaming on Linux has grown at an amazing rate. Now that EAC has announced the availability of official support for Linux thanks to CodeWeavers and Valves effort, i would like to request that AGS add the appropriate libraries to the game so that it can be launched and played under Proton.

Currently the game will launch and works beautifully all the way through Character Creation with no noticeable issues under Proton 6.3-6 with no tweaks needed, but gets the error ‘EAC Initalization failure’ upon getting through queue and attempting to connect to a server.

EDIT: Just as a note, WE ARE NOT ASKING FOR A LINUX VERSION OF NEW WORLD. We just want the Anticheat to be enabled for Linux users. We fully understand that NW was not intended for use on Linux or other non-Windows based operating systems, but by using Steam’s Proton compatibility layer the game is seemingly playable with rumors of people being able to play as far back as the Preview event through Proton but unable to do so after the implementation of Easy Anticheat during the Beta testing phase.

Yeah I agree. I plan on buying the Steam Deck in the future since I do a lot of traveling. It’ll be nice to have it work nice with it so I can do some wood chopping or other gathering and trading on the road or on a flight. The game already feels like it can play well with a controller tbh. 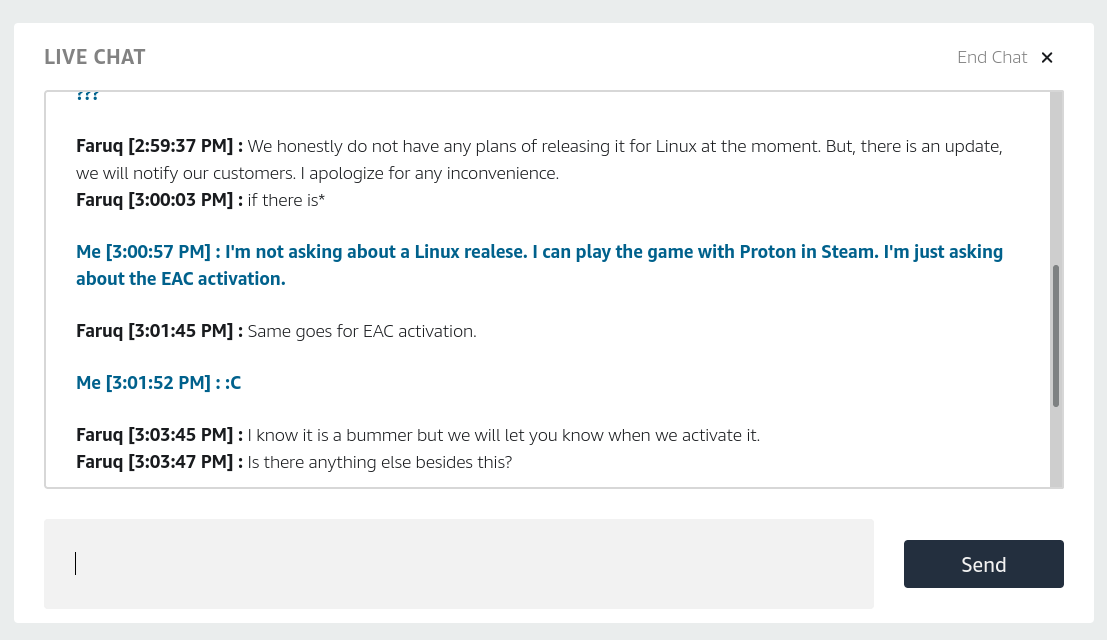 Yes please activate it, let the Steam Linux users give it a good thrashing before Steam Deck arrives because you could potentially have many more users asking for it to work. I know the team will be busy with post release patches which naturally occur to fit it into the schedule (including Q&A etc), so my digits are crossed :).

If you’re a future Steam Deck user, feel free to let them know nicely. They should gather there will be a lot more people clamouring for it though…

I noticed Faruq said “when we activate it”, was that a slip up in the wording, or is it coming?

That is intensely disappointing news, especially as there were rumors of the game being playable on Linux through Proton as far back as the Preview event, meaning that they literally only need to enable the EAC Linux libraries to make this a possibility. Given how far Proton has advanced in the months since Preview i dont really understand their hesitation on enabling this feature.

Would be nice to have some dev commentary on this. Maybe if a Community Manager sees this post they would be so kind as to raise this to the Devs attention?

I have a few friends that prefer to use Linux. Support for it would definitely help in convincing them to give the game a try. You are talking to a minimally skilled know little chat support person. It’s not like they get told anything.

Nothing beyond what they’re told to say, if they’re testing it and it hasn’t gone through QA yet they may not want to set hopes up and probably not told anyone outside the need to know people/departments, anyway that’s my speculation as it was only recently announced by Epic that it was available.

I’m also backing turning on Proton support for EAC.
I’m fine with a disclaimer that “Linux is not a supported OS and any issues may or may not be fixed”. Linux users are used to sorting things out themselves, as long as we don’t get banned.
Epic themselves said that turning on support would be as easy as a few clicks on the control panel, and I’ve heard the game works fine on proton

Jeez. You are totally wrong about support.

Actually support escalates issues and requests to devs so it’s a valid approach to get voices heard. Depending on who you reach, they could actually make a huge difference in where this task gets put in the backlog.

what large company have you done support for with hundreds of reps that info actually got pushed up to devs for fixes?

Not my experience at all.

Lucky you, I am a dev who works with support teams sized in the hundreds.

A support case will be logged and categorized and they absolutely do help with escalation.

Obviously it never guarantees anything, and linux topics will be minuscule compared to launch bugs. But it is a platform with a new major device release on the horizon, so we may get lucky.

Then you won the lottery, and your clients did.

No sarcasm at all, that is great for you. I bet that really helps you connect with your clients, and help them.

It just hasn’t been my experience.

I hope Amazon is like your company. Even if it doesn’t end up fixing the EAC issue, would be nice to have support being able to actually help people instead of giving copy paste answers and not really being able to help.

This will determine if I’m going to buy the steam deck or not! It’s all in Amazon’s hands.

How did you get access to a live support chat?

Ya could just figure out how the anti cheat software hooks in and mock the responses just saying.

I would love for it to be enabled as well, since I don’t want to get windows on the next computer I build.

If anything, this is the best reason for them to enable EAC for Proton. Linux users who want to play will find a way to do this, even if it means hacking into the software. Ironically, finding a way to circumvent the EAC would actually open up a potential for hacking/exploitation/cheating.

Would they prefer a linux community to be able to simply connect, or all of them to have to hack a client and potentially access cheating?

+1 for having EAC enabled for Linux users of steam/proton.