DMG is still odd, you still hit high sometimes 3-4k, with very low in some players but I’ll out that down to gems etc.

There’s something odd about BB stance and flamethrower animations. Movement is off

I have had the same experience with damage… its was much higher when the update went live.
BUT the no damage part Ill probably blame the terrible hitbox bow has… I literally watch half my shots go through the player lol. They really need to work on that.

I don’t think that has anything to do with the hit box.

what no 20k per hit, this is outrageous!

Good, finally they implement this. It’s been like this with melee since launch.

The problem is that every OPR match is just an instance, but it’s still the same server proecess and it’s simply laagy. Just hit an arrow in another place, less populated area, so you gonna see, that you release arrow much faster, it flys much more straight line and hit the place you aim. But OPR is one big laaaag fiesta.

I confirmed with the team that there weren’t any changes made to the bow. Do you have a video that we can review?

Damage does need a flat nerf though, just sayin.

I can show you videos of the same problem that has been happening with melee weapons since launch. In case you guys have missed it in the last 9 months.

A video is still helpful in diagnosing the issue that’s being experienced. I don’t want to assume to know the cause of the issue.

this is one of them. I know it’s not technically a melee weapon (voidblade) but look at how this guy’s target health bar doesnt even move when he’s standing still.

Here is another one, this is an old video but this bug is still happening from time to time even in pvp. 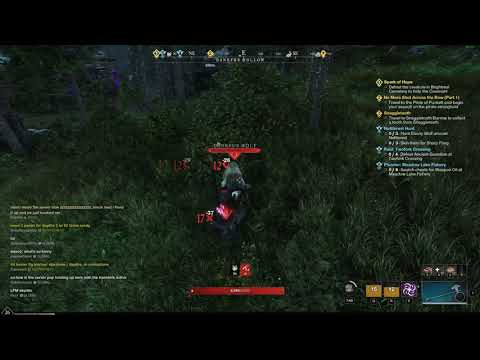 Honestly you guys need to go out (to youtube/twitch) more and do some research about what’s going on in your own game.

I had this problem, if a player “hits” the enemy (player/monsters) while he is in the medium or heavy dodge animation, if you don’t switch to another weapon and use a skill, you stop doing damage for some unknown reason, logical is that something very, very rare to happen, but you can replicate if you have time to spare.

Medium dodge is easier to make this happen. That’s why it’s used a lot in war.

idk could be desync but as far as less dmg sometimes, I had to move up to med 200 con after being light for about 2,500 hours and run 4 emerald gems with 2 phys aversion to combat bow meta (and also to survive when a bush wookie SnS hatchet user leaps out of a bush). I think other people are doing the same.

I also came here to say “what?” but you beat me to it.

Can’t tell you how many times BB shots don’t register T_T, and sometimes randomly when they do, the pellets do 9 damage exactly for some unknown reason o.O

There has been numerous posts and complaints about this no damage bug. I guess to stay on the positive note (for once) I’m just glad that FINALLY someone from AGS take notice.

yep. and fireballs going though ppl and floor nor even leaving the burn field behind. just go straight though the floor…