The Good, The Bad And The Hatchet

thats still a 1 hit, I think 80% fortify at 1000 HP is a better replacement, and or a “duel wield” ability when u activate beserk. Regardless, without beserk, hatchet is borderline dogshit lul, social is good but single target and brief, feral rush has terrible lock on and is only good when backstabbing or using against a non grit user and is also an easily dodged attack with a long recovery time, and everything else is ok at best. This is coming from a hatchet main since launch. Beserk is literally just grit, extra dmg + passive healing every few seconds, + CC cleanse on activation with 20% haste. CC cleanse is already a thing with entomb and Cleanse pots, 20% haste is everywhere now on a lot of weapons, the uninterruptible part, is well, grit, and the CD is 18 seconds and only starts when the effect ends. Its not really that OP. Hatchet as it stands is a solid weapon with very little roles in pvp, its literally only good for running low con and killing squishies and healers with it, that is all, which there is nothing wrong with it but it is far from OP.

I agree tho, 99% of hatchet users are left click bots. But left click is the strongest thing hatchet has, theres a reason its got the highest crit chance and crit dmg on the melees (from what I remember), its abilities should be used to set up a left click chain or buff ur left clicks, thats the whole point of it and thats why I like it.

Hatchets abilities are not bad, but they are very underwhelming and single target, beserk is the only thing hatchet has that makes it stand out and actually viable, without it, hatchet is a terrible weapon that would get outboxed by almost anything and outclassed by spear and thats after taking exploitation on throwing tree, if they didnt nerf adrenaline rush, exploitation, and take out boot and rally I mightve agreed with you that hatchet could stand on its own without beserk, since u would have unrivaled stam regen, but now I dont think it would be viable, its already heavily underutilized in the pvp scene and literally a sin to slot in wars, imagine taking away its defining and only above average ability, it would be as dead as blood tree on rapier.

One thing to note is that the hatchet is the second highest dps weapon due to how it stacks empower. By using light attack left click and canceling the 4th light attack with either raging torrent or rending throw. But that is only in a pve setting. In pvp the enemy doesn’t stand there so you can’t stack all the empowers like in pve and deal significantly reduced damage.

The blood rapier has an inverse problem. First you need to be using the blood letting perk. You can dance around and get 3 bleeds then flourish and you’ll do 7~8k burst dmg by flourishing right after refreshing the bleeds. The bigger issue is the inconsistent hitbox on flourish but you can play around that a bit. In pve the raiper does decent dmg but has no CC/survivability. This pushes you to use the Grace tree which also works better as a support/escape for most weapons, with a frame 1 counter and longest dash in the game.

Hatchet in general needs a rework to spread out the power curve.

I think they need to work on hit register as well,hatchet and voidblade is really in bad state. Most of your left click goes to air.
as a long time hatchet player I do agree hatchet become a some kind of support weapon rather than main damage weapon even tho it supposed to be damage weapon.I am not talking about PvE.
Its mostly because of the damn hit register,my hit goes to waste most of the time so instead of wasting left click which doesnt register,I can use debuffs with throw hatchets and hit with a better weapon (spear or sns).
They need to fix hit register(lunge or whatever u call it).
Also it feels strange that hatchet doesnt have a lifesteal perk. What I would like to see is fixing the hit register and adding lifesteal. Feral rush is a weird skill as well,the only way u can hit this skill either opponent run out of stamina or has to sleep in pc.

Yep. Upon launch the hatchet was amazing. But there was some early on hot patch, that ever since, I’ve had issues getting my hatchet to hit. So many misses which clearly should have been hits. So many it’s not close to being a coincidence. And your right, feral rush was so inaccurate (esp the root, even if i got a back hit) I switched to rending throw, because atleast I have a 50% shot of hitting that.

I actually have a lot of data on the hatchet hitbox size and how (in)accurate it is. I can probably post later with pictures or a video to show off my qualms about it. I’m not sure if that would warrent a new topic for some mods eyes to get on it.

I think this topic is pretty good to give feedback about hatchet so devs can understand what hatchet needs,u should post it here rather than making another topic

no cc?
social distancing is a ranged root… plus feral rush is a root when hit in the back and it slows with armor perk

I mean u already have mobility rend disease defy death self heal and top dps… what more do u want?

It’s in a difficult state right now because Berserk and Defy Death are sooooooo good, you can’t really alter much without making it the dumbest PvP weapon available. But I agree it’s not the best design and could use a rework (though I wouldn’t expect to keep Berserk or Defy in their current state if a rework every does happen…)

It doesn’t help that the throwing tree is always going to be quite mediocre. It makes me especially nervous that daggers might have a throwing tree … they did NOT nail it the first time, so why would they try again?

Video to show how inconsistent the hitbox is for the hatchet (throwing). Normal light attacks just can’t hit low targets without looking down. Sorry for the potato quality. 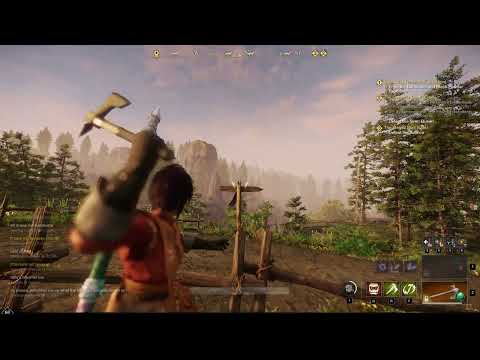