It feels like I am literally playing a third of a second to half a second behind with only 60 RTT, and AGS is going to gut the current fluid combat just to fix it for pvp balance.

I think we all have gotten used to it in pvp, but the skill level of the player base is getting to the point where its taking advantage of it. At this point, only terrible light players die to any melee weapon in a 1v1 due to the lag + light dodge when not trying to get hit. This does not include the get out of jail free cards like ice tomb and riposte after wasting stam on bad dodges, wasting all movement abilities, wasting ice shower/ice storm, or not counter playing things like blocking grav well damage/letting feral rush back attack.

Only slow windup skills are possible to visually counter without prediction. Ice shower is already half done the instant the visual cue starts, and now every IG player just runs up and spams that skill on top of other players. Riposte could be done before the weapon swap on my screen and is still visually unclear when it starts. The Leaping Strike skill hits me during the start of the animation. I have to dodge spam instead of visually counter playing to weave in more damage. This leads into the stunlock combo meta.

The hitbox of skills are off probably due to this lag. Flamethrower visuals do not match with the hitbox even when its not invisible which is only half the time. Shield bash and Riposte both have hitboxes that extend behind the player. Warhammer skills can stun/knock down and visually have the damage number appear above the other player and not do that damage to the other player. Spear’s hitbox in general do not match the visuals in a fight, and I don’t care if it will then end up looking like a tree or massive thunder thighs during the kick. GA charge has to be directed at the sides instead of the back of the other player running away or it will probably not hit.

I would like to know what the RTT the game’s pvp combat is designed around so I can know if my ~60 RTT is to high and if I am causing the same problems for other players. Is the dodge stamina change the same as the i-frame increase before the game released to counter the lag? Increasing the melee attack tracking is not a fun interaction for the other player, and a working melee attack tracking feels like a turd being stuck on you just like the flamethrower skill. Just remove the “root”/standing still during regular attacks and rework movement bonuses like bloodlust to compensate.

you need a tldr.

my tldr. sometimes I will be mid fight and my frames drop to 10 and I literally just get out and keep running till they stabalize. please fix ags

always have felt 90% of this games problems are server-lag and performance issues. we have been asking for months for an exclusive fullscreen option for the game as well, theres no secret all games run better in true full screen. these devs just dont care and at this point this game is no different than early access games on steam. AAA studio but the game has been this bad for months its pathetic.

you need a tldr.

TLDR is the first sentence. My frame rate is fine in big fights 30 ~, but the particles need to go.

90% of this games problems are server-lag and performance issues

The major problem is even if your personal performance issues are fix the game will be balanced around the server lag.

In big fights I get 55-60 FPS, but I still deal with this crazy lag youre talking about. Sometimes if I am using an ability that gives movement speed haste to finish off someone, my game will lag an extra .5 to 1 second as i am spamming the ability key (I can see it being spammed on my UI also, but nothing goes through until the lag resolves) and during this time my ability will not fire until the lag spike is gone, yet I can see my enemy moving around still.

This is incredibly frustrating as it leads to me losing half of my potential kills or more.

Also, musket is now completely unusable for me for the last 6 months and before then I was a musket main. I have to LEAD where the hitbox on a character will be in order to hit the shot. It looks so goofy on my screen…

This is the only game with an fps situation where I have a serious issue timing and hitting my shots. Super frustrating.

as a heavy bruiser it really sucks, anyone with a spear on me desyncs me to shit and i cant react properly in piles.

there are critical low hp situations which need proper reactions and i dont get the chance, because the information being displayed on my screen is different from what is actually happening to my character on the server, and it feels fucking bad.

This months patch and hotfixs are making it worse.

Would recommend googling reduce latency and frames, there are many good options around.

My lag used to be terrible and since desync fix and doing some stuff myself it’s much better.

Still get it with grav well at times, but that’s buggy as hell so who knows.

yeah? should i also use potions in pvp?

got any more helpful tips?

LEAD where the hitbox

Yeah, its crazy how I can just run through a large open field at an angle and people still miss. I jiggle around a bit, and its like I am behind a wall. The balance for musket should be terrain/cover not janky lag.

When I am in one of those auto attack gambles, I feel like I just closed my eyes.

I have 60 RTT and 50-60 frames in normal fights. Why would this not be good enough? My other games are fine even with worse connections.

Please share your “fixes” because I’ve tried everything but I’m open to see what everyones posted. Besides building an entirely new computer nothing I’ve done has helped.

I’m at 50+ arena wins on PTR now and issues still there, albiet not as prevalent as on live

its the awful lumberyard engine they use. if they would have just used unreal engine i dont think any of these lag or desync issues would be happening. at least not as often as people talk about on these forums.

It wouldn’t be much better without the lag. It’s basically an AOE snare spam fest with healers. And why would you not participate in this garbage? You get rewarded - you can wear the most armor, do the most damage and CC the most people.

lumberyard engine they use

Yeah, I remember it got worse after they fixed some duping issues and that one invincibility bug by shaking the window for the game.

Thats not even that bad. I was fighting around moon’s stairs in opr aka the demonic desync hellhole, the ones with the stone blocks around it, and I almost had an aneurism when it was a full 2 second desync. I was literally seeing them ranged attacking somewhere else. I caught a healer and mage in a grav well and was attacking them with a great axe, and I was teleported where they were attacking and died.

Well, it is not a big deal for me other than having IG user spawning ice showers on top of me before I can react. This includes them following behind me where I cannot see. I would prefer instant death than not being able to dodge+slowed for 3 seconds after another 1-2 of walking out of it.

Did some of these
https://www.youtube.com/watch?v=Dvxdz2OWJgU

And some of these too.
https://www.youtube.com/watch?v=3TarmSPWtzc

Take a restore point first as a precaution.

And these resolved desync for you? 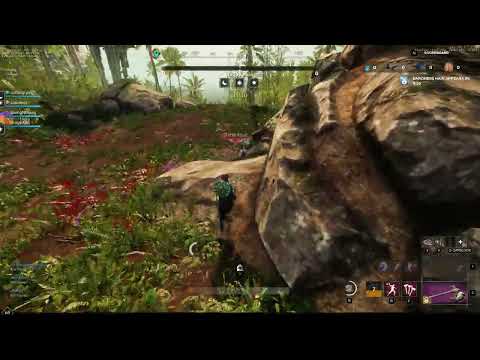 Yep, but I did it around the time desync was a major problem too.

Machine is running fine, but some people have had issues. So restore points are good