Here is the full video where I talk about this and how I found it out, please report this to Amazon so they fix it ASAP!!! 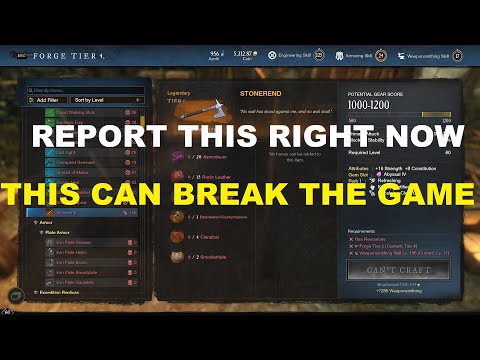 I think this is just a visual bug, I think someone mentiond it some weeks ago when they were making tools or so, tool said to have over 1000 in GS but once the person made the tool it had around 500 GS and not 1k.

I hope it is, because if people start crafting these and just 1 hitting all the mobs around them and everything actually, it will break the game and they will need to reset it completly and that will make a huge drama and for most will ruin the game…

you literally hover over it in the video and it says 500gs. its a known visual bug.

If people can actually craft this 1000-1200 weapon, they can 1 shot every single mob in game and everyone actually and it will break the game literally in few hours…

I found that specific line funny. I agree that this needs to be adressed.

I actually think people might be able to craft this, since I have been keeping an update on the forums and reddit and stuff and I have found out so many things that people are doing that is insane and if a group of guys discover this and start using it it will literally start the wave of people making this and just smashing the world all around them, but I guess good thing is you cannot trade items right now so it won’t be possible for a lot of people

There is always something good in bad situations

Have some cases that it shows 500-510 and you are excited to create a beautiful epic mofo, then when you craft is a shit 480.

You should craft it and look at the stats to really check if is 1200gs.

My armoring is really low haha and to gather the mats and level it up to 186 it will take me a while and also there is one resource missing and only thing i have found about that resource is, that is dropping from world drops so its completly random

I tried relogging, exiting the game and it is still there and it still says 1000-1200 GS, so it is not a solution.

By the by, assuming you find all the legendary mats, it will still take you 2 - 4 days to make the crafted mats, if your server has every bench at tier 5, and there are people selling said mats, or you got al your stuff to 200 in refining.
The gear score itself is most likely a visual glitch. The primary attack dmg listed is laughable. And, chances are, like most end game stuff made, the durability will be absolute garbage.

As a crafter with this recipe and nearly all 200 in gathering, refining, and crafting save for one or two I can honestly tell you this weapon isn’t worth the effort to make it.

Hm, I think you missunderstood what I am saying here. The weapon won’t be 1000 DMG or something or have 30 stats or I don’t know what, it would be much much higher. Let’s say 3000 or even 4000 DMG per hit with 60 stats on it and it would actually be game breaking. The scary part is that people are able to unban themselves from gold duping and since they talked about moving the Gear Score to 1200, someone might have implented it in the game actually. (Just a thought tho) Or it got bugged somehow.

Please, even if this might be only visual bug, please report it and feel free to use the video from above as a proof to Amazon. More reports we show, more attention we will get from them and the game will start running normally as it should be.

you didn’t really make a second thread for this

Maybe I misunderstood but without a 1000 GS or HWM yourself, you can’t craft or reach that GS on an item and it is a visual bug because it’s not the only weapon like that. What you craft is based off of your own HWM for that slot/piece iirc

Yeah, but like legendary weapons have a 600 limit, this might be the same with 1000 limit and goes above that is what I think is really bad