Thank you for bringing this up! I’ll have the team look closer into this!

Thank you! Incase you didn’t see, Dagrothus figured out how to replicate it and I just tested it as well. Swapping weapons while knocked down instantly gets you up

There are many different ways to do it as well. If i hold right click (block) and swap weapons I can get out of knockdowns 100% of the time

Does this also break stuns, because DRs seem to be having strange effects, often working when they shouldn’t be. Bummer for knockdowns

like I was able to maybe 50 % of the time on a really good day, usually a lot less move my player model by hitting dodge + blast shot when I would get blast shot and be on the ground just enough of a movement for them to mess up the combo

grit bug has been in game for a long time now. Very annoying when you stun bruiser with shield bash and they don’t get staggered after you feral rush them, cos they’re still in grit even while stunned…

Please don’t. This whole exploit nonsense is a symptom of players failing to grasp the concept of complex reactionary combat systems. There is no real problem with this is new worlds is pettering off into an over simplified combat mechanic and it’s grown boring for many of the players that have already left.

Looks like full freedom set. or maybe the cleansing perk working even while stunned and they drank a potion and it broke the stun.

are you okay? it’s an exploit lol. hold right click and swap weapons to instantly get up from any knockdown. i literally cannot get killed right now after i found out how to do it.

I agree, fix this as soon as possible. This will make any CC build unusable.
And I thought all the time that this is a desync problem. It is also already remarkable how much this already exploit. (and because of this thread probably even more from now on).

fun fact, it wasn’t the recent patch that made this even possible. I’ve posted about this a while back.

What is your character name in New World: Jubbin What server/world did you experience your issue on: Camelot Describe the issue you are experiencing: you can cancel knockdowns almost instantly. Is this a bug or an exploit: bug, can be exploited. (if a bug) How did the issue effect your gameplay: if more people knew about this bug, OPR would be filled with people that stand up immediately after being wrecking ball/sweep (if a bug) Were you able to recover from the issue: it can be done at any …

I made a video too. lol over 2 months ago

People don’t want to listen until it happens to them. otherwise they just go about never knowing it’s a huge issue until it’s exploited. I even said it was easily exploitable.

The devs absolutely knew about this, yet didn’t fix it before adding in more new stuff XD smh

There double clicking a direction and shift, its the same as the double knock down mech. Frees you from it, if you do it quick enough, you will roll even in heavy. Its so people can escape chain cc’s. Has been in from start of game, but has never worked right. Works maybe 40% of the time.

You simply just weapon swap into a dodge when you get knocked down. lol don’t even have to dodge… just weapon swap will work, if timed right: you stand back up instantly, which can be AHK macro scripted for a single keystroke.

if timed too late: you fall back down and extend the knockdown effect, no joke lmao 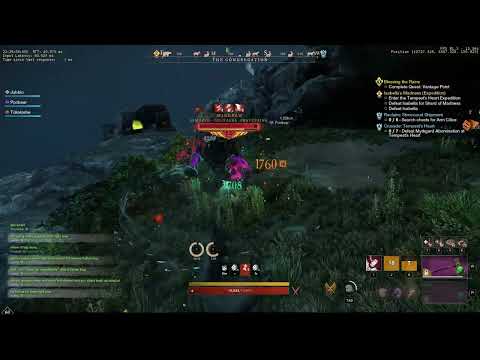 The mechanic to dodge out of a knock down has existed since the release of game, its just double tap shift and click in a direction. Also if this worked right instead of maybe 25% to 40% of the time, skill of players could be raised.

p.s Your a dev, you should already know that this has always existed, and that the reason behind it was to stop chain cc’s. It was just never perfected.

You’re wrong about what they are doing… it’s not the mechanic of having a free dodge roll…
It’s not that. the OP is referring to what I just posted above your post. I’m 100000000% sure…
I know because I can do it 100% of the time… any knockdown. and this wasn’t in since day 1. it happened more recently, just not the may patch, it was before that one for sure. Like 2 patches ago or so.

iv rolled out of a ton of knock downs right as they happen, it has existed since start of game. Its not a stun, so there skills and movement still work. Just got to be quick, its the only way a tank ever dodges. also was first dodges in game i ever used, played tank for first 4 months of game. Id say if there rolling on contact of the knock down that’s exactly what’s happening.

It’s not rolling out of a knockdown though, it’s literally just standing your guy back up with weapon swapping. There is no roll needed. no dodge needed… just a weapon swap if you get knocked down.

Even if you’re not allotted a free dodge roll you can still do it… 100% of the time.

I like how you think you know what it is and would still debate it even though I have proof.

well the other has existed to stop chain cc’s but this will be patched so doesn’t matter and will be fixed soon enough don’t let it bother ya.