This is of Detrimental Concern!

I hope you can see just how extremely important this is…

A short while back, I reported and recorded one of these that couldn’t be more obvious. This wasn’t an active bot. This was a BOT BOT. As in obviously using 3rd party tools to navigate the game and lock on to resources. Active bots are just as bad and just as obvious. They will always gravitate toward resources automatically if those resources pop up around them. Like for example:

Btw… This bouncing issue when you’re harvesting, mining, gathering… Is making me dizzy as hell. Can you stop the bouncing? Maybe fix some of the resources stuck in the air?

I can’t stress enough how each of these issues are a game stopper for us. It makes the game unplayable. My server was a very active server in the beginning with a maddening queue only now to have maybe… MAYBE a hundred people on any given night! A good chunk of those being farmers that stay in the same areas day and night after day and night running from one resource to another.

What are you actively doing about this and how much longer do we wait? I’m ready to just kick rocks and I’ve stuck around through all of your BS this long… Pushing away the thought of getting my money back for an unplayable game because I felt like you would come around to fix this stuff. I gave the chance beyond the point of getting my money back only to be fooled by this BS.

So will you start offering refunds now? What about the money I paid for all of the pretty skins and such? What a waste! I’m so disappointed in all of this. Do you guys think this is going to help paint a lovely picture for your company for future games? I’ll tell you right now… I will NEVER participate nor buy another game from this company for as long as I play games. This has got to be the most poorly managed title I’ve ever seen and I’ve seen some real doozies.

I’m not trying to be a dick about all of this… I’m just at this level of ‘had it’ with you guys and how things are actively and have been for a long time now.

How bout some real feedback here. Tell me why I should stay. Make me understand the need to stick around for a little longer and tough it out… What do you have?

Whoa that’s a lot of words

So instead of reading, you just had to respond that it was a lot of words.

I like the honesty, I didn’t read it either tbh.

I didn’t read a long post before posting once. I got flamed. Now I read the whole post and then make my response.

It was long and covered all the same things everyone else has said. I don’t think there were any new points but I’m glad to see you came to the same conclusion. Welcome to the forums.

i feel you my dude. Its so sad. I gave up

Server mergers are on route. But personally I don’t think this will totally resolve this issue. Thing is, you only truly need 5 people for a dungeon for example. Some people just aren’t very social. Prior to fellow guildies stopping New World, many of them were complaining about lack of people to run dungeons with. On a server packed to the brim with 3+ hour queue times.

I mean, there’s no fixing that. Except for a dungeon finder tool. Which is in the making. And likely for that very reason.

Meanwhile, I play on a server which only has about 150 - 160 players during peak these days, and it has people doing dungeons together very often.

Lack of decent gear and mats on auction house making it pointless and nearly impossible to update your equipment to more than junk status. If you want to advance this, you have to be fighter, farmer and crafter all at once, making the balance of level to gear total BS.

Well, with the TP down still right now in EU, that is certainly true at this moment on my server too

. Nonetheless, before that, despite the low player numbers, we actually did have an active market. Pricing wise there are definite concerns though, contributed to by the misalignment between available resources and actual crafting requirements. But I think that’s a separate issue to resolve.

Odds are, the lack of (close to) best in slot gear on your server, may also be a result of crafters providing their guildies first. Hard to say really.

Lack of party mates to enjoy the game with. If you play, you’re probably playing solo.

This is not a dev thing to fix though, because this even happens on many crowded servers. Many people are loners in MMO’s, just like for many activities in real life. They do not play an MMO to be in constant parties. Their interaction is often limited to things like trade, party members via a dungeon finder, etc. Devs cannot ‘fix’ people. And to be fair, there’s nothing to really fix in this matter either, because it’s not really a matter of it being broken to begin with

Inability to do quests or hunts that require more than 1 person because… No one around to do it with.

This is also once more just a player issue mostly. Devs tried to make people engage in activities together. And for most of these you don’t even need that many playernumbers. But most people just aren’t up for this.

And I think that’s a very important realization this community needs to have, as an MMO community in general. Because this is not an issue of a server being underpopulated. I mean, for example for killing Papa Bear one needs about 3 people. ANY server can do this. Yet, people can be looking for people for hours.

I get the romantic idea of people coming together in MMO’s, questing together, killing foes together, etc. But in practice, this just doesn’t work. The playing field changed. If you’re not already in a guild, not on their discord, you’re about 10 steps behind. And if your guildies can’t be arsed to help, find a better guild.

LAG??? How it is possible that the servers you play on (US West and EAST) when you’re right smack in the middle of both, are so laggy that it often gets you killed in game, when there are hardly anyone on the server? My guess is that the amount of people playing on the 3-4 servers that have a population are affecting ALL OTHER servers in that area. Why are you bunching up separate servers on one server?

I don’t think this is the case. The lag you are experiencing likely is due to a problem somewhere within your own home or with your own ISP. The Amazon datacenters certainly aren’t going to cripple by a few gameservers. The reason you are noticing this likely though, is something which I feel is down to AGS’ decisions.

And I’ve noticed it myself too. EVERY single other service, is lenient. A single microsecond of data loss, is of no concern. And speed is of no concern. Yet, with New World, it has to all be pitch perfect, or otherwise their server code will just cripple your performance. If there is a single packet drop, you will for example be thrown out of the TP, you will have your actions cancelled, you will stop moving in the direction you were heading, or even stop at all. It’s insane. I struggled with this for about 2 weeks myself till I did some in house network testing. I have a glass fiber connection, in house I use a powerline lan system. Not ideal, but good for everything else. I had a 0.01% packet loss rate over multiple tests. It wasn’t till I fixed this, before New World became playable again. I can just imagine the horror if you for example are trying to play over e.g. WiFi or need to rely on a 4G connection in regions of the world without internet landlines.

This all really started after they started countering the duping. But it just feels as if whatever they have done, it’s not the way.

So instead of reading, you just had to respond that it was a lot of words.

Welcome to these forums unfortunately. It’s refreshing to actually see a well written post for a change. But as you’re clearly notice, most people here barely get any further than a few words. And even then it’s often lacking punctuation.

Love #1. Biggest issue, hands down. I can’t believe there aren’t 100 posts an hour about this. I hope they’re focusing on mergers.

Can’t say anything about #2. I’m East playing East and see no lag. My buddy is West but playing East with me, and he feels there is some lag in PvP, but can’t quite tell how bad it really is. It’s almost not noticeable - but something feels off to him.

#3, I don’t run into bots… haven’t seen a spam message in probably 3 weeks either. My server is low-med pop.

Where are you located vs the East Coast server? I’ve ran pings to east and west coast areas with no issue. The servers themselves, however seems to be the culprit. There is also a post from devs to the community asking about this issue. Looks like i’m not the only one. Thanks for the info!

The bot issue would probably be less obvious if I were on a populated server. Being so very few online on Aukumea at any given time, they’re all in your face, so to speak so they tend to be very obvious. Same people also, day end and day out. This is high… I’m usually around 25ms or less.

Thanks for the info.

These are the pings to General West and East coast locations from Austin Texas. I’ve also included Amazon server pings as well. 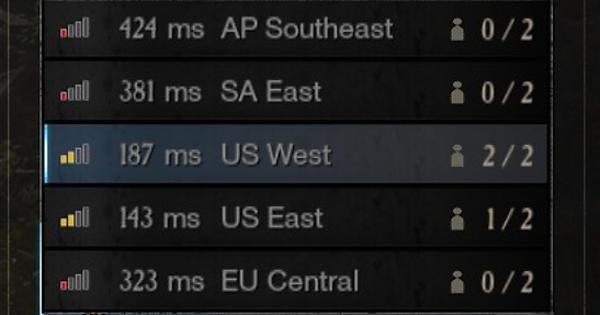 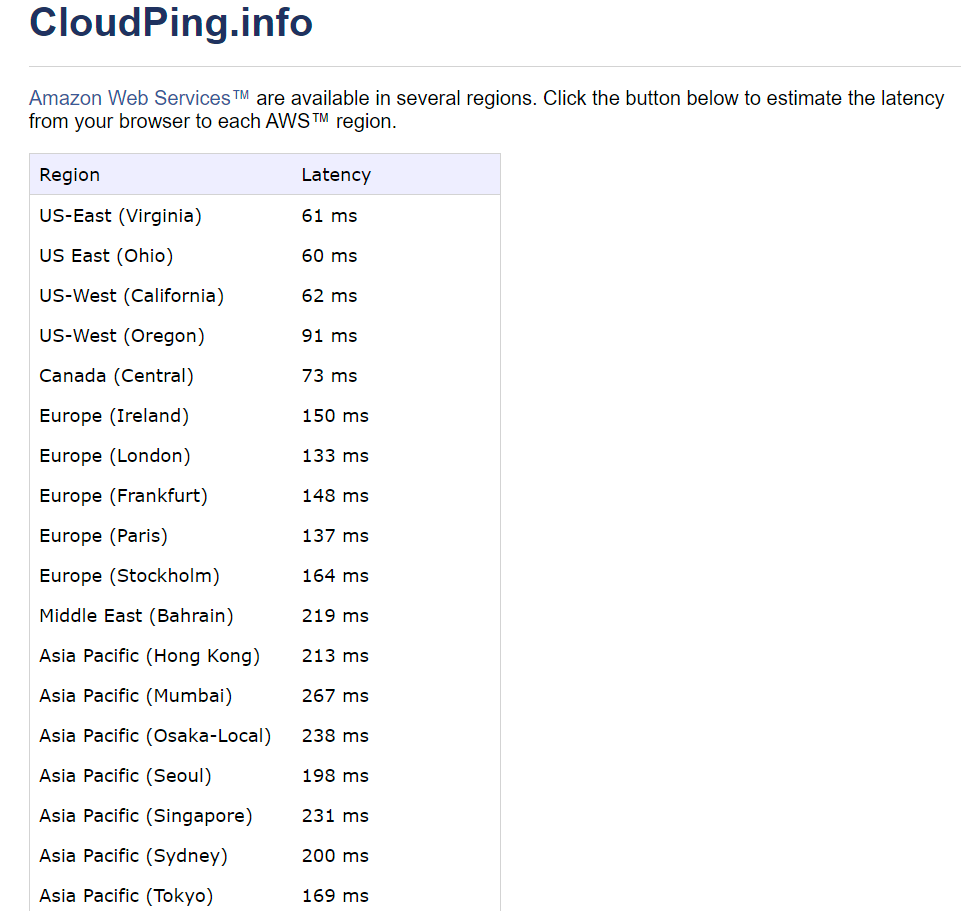 If I could find the IP addresses for the east and west coast servers, I could try a direct ping and tracert for each and see where the problem lies.