Update on US east Outage

If this happened then they should just do a complete wipe of every server, and have everyone start over.

Honestly would probably go through it for a minute, lose interest and then leave. Already worked really hard to get where im at in the game with over 400 hours played. But I do know this, id use that discount on my first house a hell of a lot smarter.

Yep, that’s what I see as well in my own console - Looks like the elastic containers are still behaving wrong…

If you want to take this moment to learn about cloud infrastructure. I know I would rather be playing. - If that little yellow box thing gets messed up, then it doesn’t know what container to call, much less what to spin up. I’d say watch us all login on our respective servers and crash them.

Then I realized there probably aren’t enough players on these servers to do that.

Yes, just in case anyone needs a notice, servers are back online! [Notice] Server Issues - #5 by Luxendra

Lux, please don’t judge us for what you might find in this thread.

It was a trying time.

So they have a team, that is monitoring another team to make sure that other team is doing their jobs. Seems productive, instead of using the time to address bugs for the team to fix.

their teams must be very small to me, I feel a lot more can be done if they hire more people to find and fix the issues revolving around the bugs currently.

This affected aws.
It was not a NW issue.
Thx for the updates.
I believe you guys are going to fix everything soon

You just got to a experiment only a sliver of downtimes or non-functional game mechanics compared to EU players to date.

Says East Coast servers are up but i cant log into the game. Easyanticheat is now blocking it
Error Code 30005 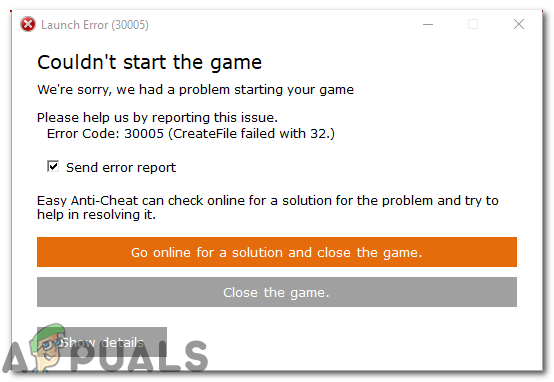 'Error 3005: Create File Failed with 32' error is displayed when a user tries to launch a game that is protected by Easy Anti-Cheat and it occurs because

I just rebooted my computer and it works now