Using the Game Unintendedly - meaning in a way the community managers and the developers have not intended is an Exploit per the powers that be whom moderate the forums.

So if anyone decides to for example ignore everything, do no quests, do not chat with anyone, do not use Trade, do not use storage, and do not participate in pvp, but only Cuts trees down all day everyday… <---- That is an exploit cause you are playing the game in a way that was not intended.

Also just a note we need a PTS server badly, if you haven’t seen the bugs and exploits right now then kodos to you, but we need your help!

Help by sigining the petition to Get Amazon to give us a PTS server for New World. 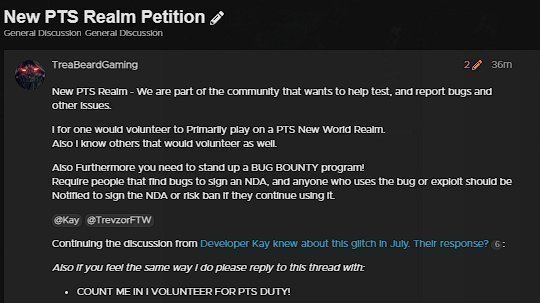 If someone wants to farm all day, then they’re playing the game the way they want to. The game allows farming, which is what the developers intended and people can do as little or as much of that as they want.

To exploit, is to make use of (a situation) in a way considered unfair or underhand. How people use their time in game is for them to decide.

That is correct @SyianZi but what I’m saying is in reference to the multiple posts from MODs of this forum, that say using the game in an unintended manner is an exploit…

Which it is not, their wording is vaguely accurate, and could use Grammerly…

it’s worse than this…

the issue is really with the Game itself, and how it came to be, and while I think some of the issues we have seen (above all the chat issue, which is a rookie mistake and no excuse can be made for such) may as well be lack of minimal quality control - some are overall design flaws which developers may not even be able to address properly.

considering what was said in several different medias like twitter, news sites, twitch, even in this forum, AGS developers had pointed out some flaws which seems they have been forced down their throats by more senior people in the ranks of the studio.

and the “worst” part is really us, players - I’d say a lot are unhappy with the current state, lately a lot of noise about hatchet stacking damage, or maybe because person A or B is now exploiting respawn timers which are clearly bugged - however, if we look this objectively, many people also exploited Orichalcum which had the same respawn issue, or people is also running Resilient gear (which I’m inclined to say is by far the most overpriced talent in any gear) because we all also knew it was bugged and not working as intended… “suddenly”, the issue is no longer the actions taken long ago which decided the fate of this release, but now the issue is player X or Z who wants to use hatchet… or hammer… but hey, everyone is running their Void gear with a bugged perk and no one says anything. Why the double standard?

PTS at this stage may not even help… and let me expand, they had for YEARS a set number of people in Alpha doing tests and look where we are? - do you think none of this was reported? - we could agree some issues may not have been found until release, but considering the current state, I think people would flood the test server in order to find exploits and also keep the knowledge - like it was done in the past… so basically, same as above, we now switch the responsibility to players… and it shouldn’t be like… people accountable should be held accountable, after all, they are all professionals and I’m sure no one is 15.

Speaking of respawn timers, sometimes mobs randomly instant respawn when killed then stop spawning for a couple minutes… this game is a mess and we need TESTING before it goes live

I have learned that if no one is near a spawn the boss (or any other mobs) respawn in two minutes instead of 5… so basically people kill the boss, walk a certain distance, and wait 2 minutes to kill again… - I mean, it makes no sense… if more people in the area you should spawn quicker, it’s the opposite… but in a way that is not even logical. PTS itself would not solve when their backlog is this big, maybe it would provide some degree of confidence a new patch is more stable, but even thou… they would need to redirect resources to watch that, and do they even have these resources? - probably not…

Of course they don’t have the resources for that. They don’t even have the resources to have dedicated GMs watching over their servers to deal with cheaters and spambots. After all, they are a small indie company, and not funded or supported by a multibillion dollar enterprise or anything, so just be happy that they’re doing what they can for now, at least.