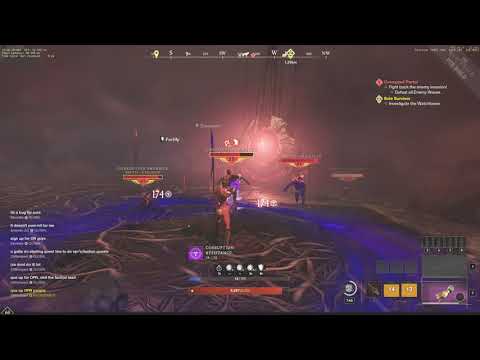 Are you perhaps attacking too soon thereby canceling the animation or something? Hitting the ability button for void blade puts it away (I use this occasionally when i need a quick harvest and can sacrifice my blade) besides that my blade never drops till the time runs out, NEVER, although I do occasionally ACCIDENTALLY hit the ability button to drop it. Level 1 to 19 in void gauntlet this has never happened to me

To be completely honest, I’m not entirely sure what I’m doing that causes Void Blade to be cancelled, all that I know is it happens frequently and the game play doesn’t feel smooth at all.

I know it took me a while to stop accidentally hitting R (my bound key for void blade) but once I got used to it I rarely do anymore but that’s the only time it drops early for me. Sometimes it actually lasts past the timer when im mid combo so yea maybe it’s accidental press, otherwise the issue you’re having I’ve never seen

It happens to me all the time on accident and is so frustrating. Its because they made it so if you press the same ability button to bring it out it will put it away which is very easy to accidentally hit and screw up your whole combo/strategy. whoever thought that was a good idea was trippin

Yeah, this should really be a toggle ability with a mana cost per second.

So I set my void blade skill on my Q that I don’t accidentally click it while in combat. Once you get used to it, you will get the hang of it!

Only if I can drain life to get mana back WHILE I have it out, currently you can not drain mana from your life if you are using it.

The problem here is you are attacking too soon after activating the blade, which makes the gauntlet itself launch a ranged attack, this reverts it to its previous state.

This is a bug however and the Void Blade should be an instant transmission and should not need to wait, however, it’s simple to reproduce this, if you attack fast enough after transforming your blade, it will cancel it.

We simply need them to add a new variable that makes Void Blade definite after the transformation, and make its attack the primary attack, and not to be cancelled by the gauntlet unless the other conditions meet as changing weapons, toggling it yourself, etc. But it should not cancel itself by autoattacking.

Happens to me as well. I cast it via the hotkey but my char still triggers light attacks while the cooldown is active as if my Void Blade was triggered.

It happens when you click your Hotkey for the Sword to fast not by attacking. The ability cancels itself instantly, if you double press the Hotkey when u want to activate it.

Why are you typing in caps as if you’re upset about this post lmao… No one cares what level your void gauntlet is nor did anyone ask for your irrelevant input. Weird humans mannnnnnnnnn…

On topic though, this is indeed a bug and happens to me all the time. Pretty frustrating and to be completely honest with you, I pull the blade out for a reason… why am i putting it away when accidentally clicking the ability again to get it to pull out because the game cant keep up with inputs.

Terrible design and needs to be reworked.

Yep, having this problem too.

I can understand that it may be useful to put it away, but as long as the ability is still active, pressing the action button over and over should just toggle it on/off. It’s quite frustrating in certain situations to have it cancel and you can’t pull it back out until he cooldown is up.

I stopped using void gauntlet because of this, I have cast the ability and took my hand off the keyboard and just used the mouse to click and it still disappears.

I have the same problem, but i dont press the button again or attack too fast after, i can disappear after 1 sec or after 5 sec at random.
I thought it was my connection since im on wifi, but tbh, I think it just looses its “state”.
Have been using rapier since its more reliable for damage and i can get away with fleche.