Why are thrown hatchet hitboxes smaller than arrow hitboxes? 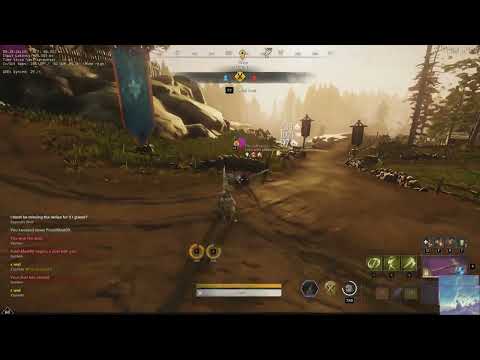 This is just one of several issues that keep this tree from being great, but I do enjoy using it nonetheless.

But seriously, This would never happen to someone using a bow lol. I cannot tell you how many times that my throw hatchets have been literally jumped over because the target used wrecking ball or something.

Projectile speed is also really bad. New World - where your character can do super fast spins, flips, jumping attacks and swing around massive weapons no settler would ever be able to swing but you just aren’t strong enough to throw the hatchet faster lol

Yeah I get that but I do think that the speed of the projectile is probably appropriate.

Also the damage and range is a joke compared to bow.

While I agree Hatchet Ranged side needs tweaking, comparing it to bow is a little disingenuous no? What’s next, Musket Hitscan accuracy at long range?

Edit: OP should probably specify the thrown skills especially needs to have their hitboxes looked at, reg throws not so much.

Have you see the next patch ?

They will buff hatchet’s throw to become a hitscan (because devs played God of War). New hatchet meta coming soon.

…I gotta admit a certain satisfaction about lobbing a handaxe at someone and seeing the model sticking out of their face.

The speed and range both feel appropriate, and realistic… which means they are woefully undertuned in comparison to their ranged counterparts. If they stay the same (which I think they should) the damage definitely should be increased.

Also the damage and range is a joke compared to bow.

Actually the damage is pretty similar if you’re setup right. But the “rate of fire” is certainly lower.

comparing it to bow is a little disingenuous no?

If you have the empowering rending throw perk on-hatchet, when you proc it you can get some very decent damage. I’ve crit someone for 3.6k with a regular hatchet with that perk proc’d + some empowerment from other sources(idk what their build was exactly, but I do know that they had full resil and some amount of slash resistance), but it is much harder to hit someone with throw hatchets than with arrows imo.

That was more towards the other comments about it being slower projectile then arrows.

As far as skill hitboxes are concerned, I agree with you. They seem to have the same hit rating the old Explosive Shot had, which obviously was an issue since it was changed. That being the case, Hatchet thrown skills should get a similar treatment.

Oh I see. Yeah speed wise I don’t really think that it should be any faster. But hitbox changes to make it more consistent would be great.

I’m ngl when I threw the hatchet in that video and it didn’t hit I audibly was like “HUH?”

since about two patch’s ago the first shot on a lot of hits have been missing, as if there not registering. Same thing been happening with my bow and my gs and even my ga’s grav been disappearing.

Why are you comparing 350 stats to 300 stats? Rough findings from quick testing. Heavy attacks aside (which is kind of a bad test since most bows heavy attack). Bow light attacks do 22% more damage than hatchet throws. When you add beserk and the empower on roll the gap seems to close to about 12% difference in favor of the bow. Not even sure if its fair to compare that though considering Berserk has a cooldown and the bow gets 20% empower 100% of the time.

When you factor in heavies its not even close. Bow is overtuned. I don’t even think throwing hatchet damage is bad. If anythign I would like to see them greatly reduce the recovery animations on all throwing hatchet stuffs to give it’s niche as the close range skirmisher rather than long range pelter.

This is turning into apples to oranges territory.

Hatchet and Bows have vastly different purpose at the end of the day. Why even slot a Bow if Hatchet did as much damage at range, had melee point blank capabilities (Good luck fighting point bank with only a bow.)and more stat/build diversity by dual scaling?

By all means, tweak the hatchet (its melee hitbox is terrible too), but don’t try to use other weapons and playstyle as stepping stones to try to add credence to your argument, it kills its legitimacy.

This is why forums are stupid, every demand for what should be a legitimate weapon fix turns into a thinly veiled nerf this instead post.

Did you even read what I said or the conversation prior? POINTE claimed they had similar damage. I was just showing that they in fact do not; however, throwing hatchets currently don’t excel in anything over the bow and that is why my last statement was about lowering/removing pretty much all recovery animations for throwing hatchets to give its niche as close range skirmisher. Bow being overpowered damage wise has nothing to do with throwing hatchets. Thats just a fact of the matter the damage is overtuned.

That’s the thing though. The convo is supposed to be about Hatchet hitboxes and attack rate. Why even bring Bow Heavy Hits into this (Why compare lights attacks to heavy hits for that matter, should we compare hatchet light melee hits to GS heavies too)?

You said it yourself just now, Bow and it’s damage doesn’t have a thing to do with Thrown Hatchets. Let us stick to the right subject, improving Hatchet.