Yeah I usually only have 1 ability I have on my mouse, its always for a ranged attack so I can aim and click at the same time without worrying about letting go of WASD

I have known some players who, due to similar health issues, use Gaming Trackball and Game Keypads. The track ball, from what I understand puts less strain on the wrist during movement and the keypad can be positioned in ways the keyboard cant, so it also relieves the strain on the wrist while gaming.

You know there was a time where you could use something like an joy-mouse, it’s hard to explain, it was a mouse mounted on a ball joint like a joystick and it was designed to rest your hand on top of it and simulate WASD. I can’t for the life of me find an example, it’s like, an early 2000 thing that was used on flight simulators, devised to overcome physical issues but adapted for gaming because it felt awesome, but I can’t remember the exact name tho. I’ll keep digging

Don’t give up brother there is always alternatives.

I did that with the “G” on PTR for the Heartrune ability, I was struggling to consistently activate it, I had to move my hand too far from WASD and it was making movement even more difficult.

I have full neuropathy in my left arm, and I’m left-handed.
I tried being a right-handed gamer, but the solution was the left-handed naga. Now, I’m able to even play shooters without falling behind.

Yep I was doing that for “F” already, so I may have to make changes for the new heartrunes as well.

i have a pretty high end joystick i got for elite dangerous if i could get the joystick to do the movement stuuf that would be awesome would that work?

The gaming tech industry has gotten really innovative over the years, there are SOOOOOOOOO many things out there that I am sure there is a solution for you. I will echo the sentiments above, if you love this game, dont give it up, there has to be a way you can still enjoy it while staying healthy…

I never thought about a joystick, if it has enough buttons and stuff it could work! But you wouldn’t be able to have mouse movement, unless you’re able to use the joystick with your left hand

if i could get the joystick to do the movement stuuf that would be awesome would that work?

If they joystick can have its movement and other keys rebound, I think it could. Right now the game does not provide gamepad support, but I think it was on a to-do list at one time.

you have all been most helpful and given me hope I thank you all time to go do some research gonna start at best buy and see what they have.

time to go do some research gonna start at best buy and see what they have.

Curious if this will help in any way. Saw a streamer using this and thinking, that is for the insanely efficient gamer haha and watched a video. I’ve heard it takes a long time to learn to use but wonder if it could be used for someone with a hand disability. It’s by Azeron I think if you Google it. You can map more subtle movements of the hand or even different directions such as extension of your fingers, or side to side movements instead of the normal flexion used with keyboard. The amount of pressure might also be significantly less and you can even completely ignore the middle button that simulates a key press and try side to side movements. It’s crazy customizable. Again don’t have any idea on your specific medical condition, what part of your hand is effected, severity of joint degradation, etc… but this might be a nice augmenting device for you. Instead of the usual hyperefficient gamer haha you can adjust to your hand, disable fingers that are most painful and just use movements of other fingers (side to side movements, etc). It’s something to think about.

It would take some learning but people already learn it anyways and who knows you might ascend above the level of a pleb gamer in the process haha. Something to consider!

Think there are many different versions as well. Maybe check out a video on it and see what you think. It’s intended for your left hand btw in addition to your mouse which people have really suggested some wonderful options.

If that doesn’t work, be like EFF IT and buy a steering wheel and go GA and have a blast wahahahaha. Picturing that in my head and laughing to myself. You gotta make car noises as you do it though.

OP from the looks of it several awesome ppl gave you good advice on how to keep yourself healthy and still play New World, dont forget to mark one of those awesome answers as a solution!

that might work i can actually use a finger on my left hand. thx ill try that i take it you bind your wep abilities and dodge to extra mouse keys?

Just a random thought looking through the other replies and seeing this. With tools like that, you can map multiple things to that single finger with forward, backward, and the typical pressing down motion. If the other fingers allow movements such as mild pushing or side to side then you might get something there. Then your can set up the over fingers in a way that they can comfortably rest without movement. I know you can customize it a ton but maybe even removing those parts and adding your own solution haha. Duct tape and a towel or something. Get all DIY! Totally consult with your doctor and all that but something to think about.

Also Google things as well beyond our suggestions. Have known people with amputations, erbs palsy, etc be insanely creative so don’t re-invent the wheel either!

Azeron is a bit overcomplicated imo and pricey for some.
What you can do is something a bit more funky and as a bonus you wouldn’t have to throw your mouse away. Disclaimer: this requiers some desk space.

You can buy some cheap keypad and attach your mouse to it as below: 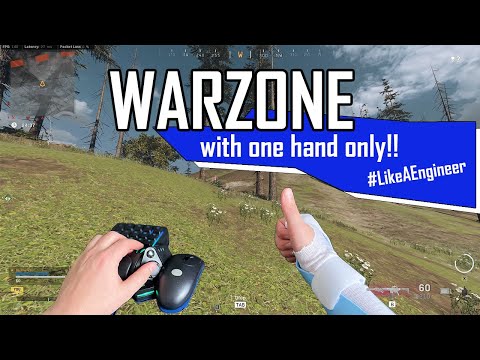