You should use bot

There is no F**** reason not to, you will not get banned and you can just sell the gold to get cash to buy another account because AGS just bans people that get mass reported by toxic companies. 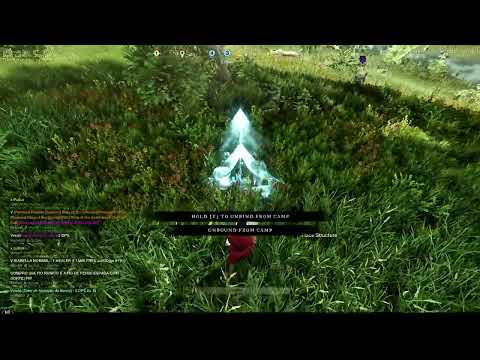 This two bots were reported multiple times and when I say “hey guys, report this bot” everyone already knows their names and that they are bot, ags just does not ban because this would decrease the amount of gold that is sold for people that still want to play this game and get “bis” without any work.
Server Devaloka, players BAMBU GEMENDO and Inguissa Barca

Good idea. Run bots and use the money to buy shards. A fast track to 625 BiS gear.

Wait, someone must have already thought of this because the bots are everywhere!

Like I said in other posts. New World is the 2nd coming of APB(All Points Bulletin) At this point in time for current New World players. Either you cheater like the rest, or you just end up like fodder, or you can quit if you don’t want to risk your ~accounts~. It’s sad but cheating is pretty much mandatory to success in New World.

Me personally I have a set of standards. So like most, I just sit back and watch the shitshow.

Good luck with that plan.

No luck required. It’s the way things are done on Bot World. And the sad thing is that nobody cares.

I totally agree with you, I report bots all the time and they just keep hanging around. I have come to these very forums and asked the devs a question on how many reports does it take to get a bot banned and got no response. On the server I am on I have reported bots everyday for a month before anything happened. I truly think they like having the bots in the game. I also think they bring out the ban stick when they need to get some sales to keep the game sales looking good for upper management. Yet they could double sales if they doubled the bans.

At this point with Ori and other items respawn timers increased, markets will be overflown with resources.
As many see this as and “improvement” it will in large scale decrease their value and people will start treating Ori as junk. They “fixed” fishing because bots by removing gold coins from treasure chests and now there is no initiative to fish at all. Mostly it became junk proficiency. With Ori being effectively changed into regular resource it will become cheap junk and they effectively destroyed mining as profitable thing to do for casual players. Bots will just now be able to mine even more amount of raw resources. By giving people a little bit of more Ori, developer gave bots even greater part in mining.
At this point Devs could add macro’s into the game so all players could bot. Giving even more resources for bots and making resource cheap is not removing bots from the economy. Message for the dev’s: YOU CAN’T OUTFARM BOTS, YOU BAN BOTS

You can ban a RMTer’s bot. But said RMTers will just use 5% or less of their profits. To buy more accounts to bot on. The only solution to bots is to aggressively go after the buyers. If no one buys from RMTers. Bots become useless.

In my 2500+ hours of play, I have probably reported 30-40 bots that I would regularly see while farming, and everyone of them, has eventually disappeared. It may have taken 3-4 weeks, but everyone eventually stopped. So again, good luck with that.

I have probably reported 30-40 bots that I would regularly see while farming, and everyone of them, has eventually disappeared. It may have taken 3-4 weeks, but everyone eventually stopped. So again, good luck with that.

This is my experience as well.

Honestly it took AGS a bit to get started addressing bots, but once they got going they are doing as well as any other MMO imho.

The problem is now a bit overstated here on the forums.

Thanks for the feed back, can you do a tutorial to set up such a bot. I want to join the dark side too

In a bad farm you can do around 3k per hour, you let your bot run when you are working or sleeping, you can get maybe 12 hours, this would “profit” at least 30k per day or 630k until you get ban, and you can sell for U$D315. yeah, even if you are a pessimist, you can just buy another account and have some cash to spare.

Me and my friends tried to create a wall of camps, but that did not work hahahha